The founder of a charity set up to help those affected by drugs, was honoured with a Special Recognition Award at the 25th Birthday National Lottery Awards, broadcast on BBC One, Tuesday 19th November 2019.

Despite her twin sons becoming heroin addicts and then losing one of them, Elizabeth Burton-Phillips MBE from Twyford in Berkshire, has dedicated her life to helping families impacted by drug issues.

She set up the charity DrugFAM in her son Nick’s memory, after he took his own life at the ago of 27 because of relapsing.

Remarkably her other twin son, Simon, vowed to quit drugs after his brother’s death and now helps his mother run the Berkshire-based charity.

The BBC produced a short film highlighting the inspirational work DrugFAM do, when The One Show’s Alex Jones went to interview Elizabeth unbeknown to her that she had won an award.

The charity works with around 3,000 families a year and runs a National Lottery-funded helpline which takes 10,000 calls annually. This is partly staffed by former service users turned volunteers who want to help others in the same terrible situation. Elizabeth, a former teacher, has taken thousands of the calls herself and understands the shame and fear callers face.

Elizabeth has also published a book called ‘Mum, Can You Lend Me Twenty Quid?’ in 2007. In it, she describes her naivety about the real reasons for her sons’ constant requests for cash as teenagers after they were groomed by drug dealers. Following publication, she received more than 25,000 letters, calls and emails from families around the world.

Her story has sold 65,000 copies to date, been translated into five languages and was adapted into a theatre in education play in 2012 for schools, police training and prisons. It had its 100th performance in October 2015 and is now available as a podcast and audio CD.

Today, Elizabeth is a respected campaigner, advising the government on drugs policy and speaking globally on the issue. She was awarded an MBE in 2017 and is now a grandmother. 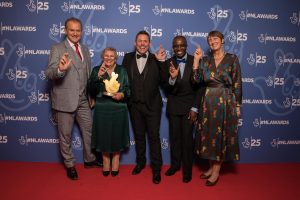 “It came as a huge shock to be awarded this recognition- I had no idea! Its truly such an honour.

“National Lottery-funding has helped make a big difference to our work and enabled us to do so much over the years. I’m absolutely delighted that we’ve been recognised in this way. ”

“Every week National Lottery players raise £30 million for good causes and that funding is invested in life changing projects around the UK. There are thousands of ordinary people doing extraordinary things with National Lottery funding within communities across the country.

“The 25th Birthday National Lottery Awards are a chance to say thank you to those that really deserve it after doing so much for their communities over the last 25 years, personally it’s a real honour to be a part of the celebrations especially in such a landmark year. These winners like Elizabeth are truly inspiring.” 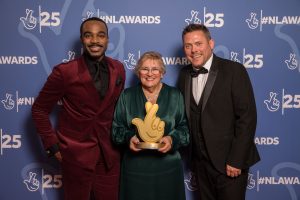 Elizabeth Burton-Phillips was awarded with a Special Achievement Award, which is given to someone that deserves to be acknowledged and thanked for their hard work. Their achievements don’t have to be large or far reaching but the quality and thoughtfulness of their work has touched the lives of those around them.

National Lottery players have raised more than £40 billion for good causes in the areas of arts, sport, heritage and community over the past 25 years. More than 565,000 National Lottery grants have been awarded since 1994, the equivalent of around 200 life-changing projects in every UK postcode district helping to strengthen communities, deliver sporting success, protect the environment, unleash local creative talent and look after the elderly and those at risk.

Visit the Daily Mirror or The National Lottery for more information.

I was interviewed for the Summit SCALE™ Vlog.

It was a blast because the interview is really rapid fire and takes just 5 minutes!

So if you want some gold on how to generate all the leads that your business can handle, double your sales and increase your revenue without spending a penny on marketing, or advertising, then check this out!